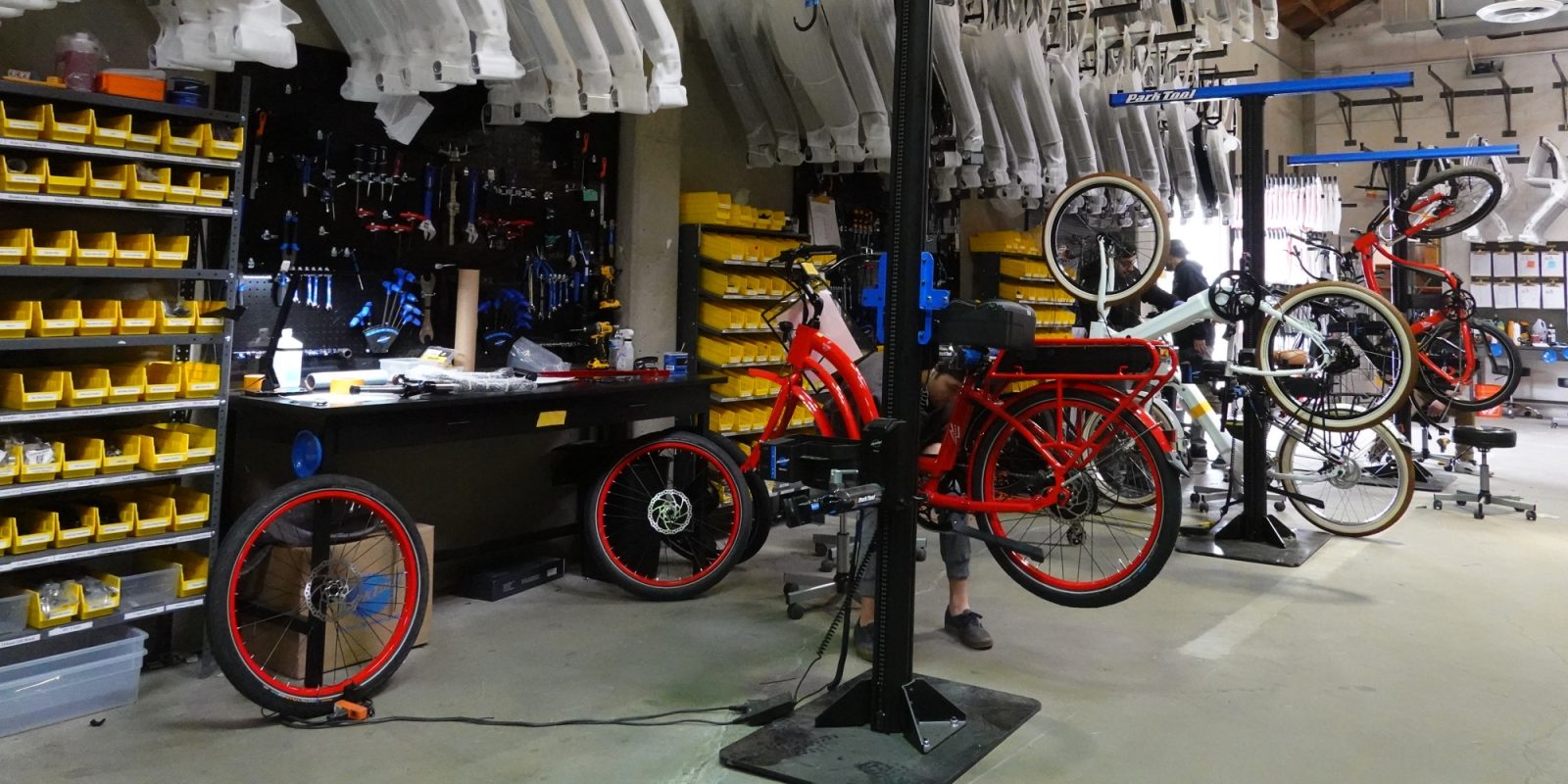 Earlier this month I had the opportunity to visit the sprawling new production facilities for California-based Electric Bike Company (that’s an advantage to being an early mover in any industry, you get to pick the good names). The company has been building electric cruiser bicycles in Newport Beach since the mid-2010s. And as founder Sean Lupton-Smith proudly explained to me as I toured the factory grounds, they wouldn’t have it any other way.

This isn’t my first time visiting Electric Bike Company. Nearly two years ago I toured the previous EBC factory to learn about how e-bikes were being built in the US.

Back then, the company was able to fit inside just one facility, though it was obvious it was bursting at the seams and using every cubic foot of space available (frames and wheels were literally hanging from the rafters several layers deep).

That was also weeks before the COVID-19 pandemic ravaged the US and turned many industries on their heads, including e-bikes. Sales of electric bicycles exploded as Americans sought out new forms of socially distant transportation and new ways to enjoy themselves during lockdowns.

As the e-bike industry expanded rapidly, so did Electric Bike Company. Newport Beach is known for many things, but manufacturing is not one of them. That meant to find enough space for its sprawling e-bike production requirements, the company had to move into multiple buildings around town.

Electric Bike Company’s operations are now spread across a half dozen buildings all within a few minutes of each other – an easy electric bike ride. Most contain e-bike production lines where the specially trained staff assemble e-bikes to order based on customers’ bespoke requests. Some contain specialty areas like wheel building sections, paint shops, and wood shops for producing custom fenders and chain guards, not to mention multiple e-bike showrooms.

And that’s a big part of EBC’s advantage: local production means being able to build one-off e-bikes at nearly the same cost as its standard models.

EBC’s electric cruiser bikes are available in several variations with step-through and step-over frame styles. Each model has a number of options for both the functional and aesthetic components. All of the options are selectable by customers during the order process, either online or in the company’s nearly 100-strong dealer network.

The options for customization cover literally every inch of the bike. There are probably tens of thousands of combinations if you were to do the math.

Multiple batteries of varying sizes can be added to several different locations on the bikes, offering up to 200 miles (320 km) of range in the fully-loaded option.

Riders can select many of their components like the drivetrain, fenders, and baskets that come pre-installed.

Metal trim colors such as the seat post, handlebars, rims, spokes, chainring, and pedal cranks can be selected.

Perhaps most spectacularly, the colors of every part of the bike can be customized. Riders can select among dozens of colors for the frame, fork, fenders, chainring, rack, and basket. Even the battery case can be custom painted to match the bike or accent it with a complimentary pairing.

Not only are there dozens of interesting, vibrant colors to choose from and even specialty options like metallic paints, but any custom color can be mixed and painted.

Want your bike to match the color of your car, dress, or dog? Find the color code and send it in – they’ll make it happen.

To achieve that, Electric Bike Company had to build its own paint shop complete with air scrubbers to clean the exhaust air from the factory. “The air leaving the paint shop is actually cleaner than the city air around us,” Sean explained as I toured the facility.

I even had the chance to try my hand at painting an e-bike frame. After getting suited up, Alan gave me a crash course. He was preparing a couple of frames getting a bright yellow color known as Tweety, and I had the honor of laying down the paint. I was nervous about ruining them, but I think they turned out nicely. I’m also quite sure that Alan went back after me with several more professionally applied coats of paint. But if anyone out there recently got a Tweety-colored e-bike, there’s a small chance I helped paint it. You can critique my form in the video above.

One of the things that amazes me about EBC is how its prices are so competitive with the rest of the industry, despite the local production.

While the company’s flagship models start closer to $2,300, the new Model E has an attractive $1,699 price. And that even includes fancy parts like the hydraulic disc brakes, ultra-comfy saddle, and ultra-bright LED lighting.

As Sean explained though, keeping manufacturing local actually helps reduce a lot of the costs associated with the production process. While labor is, of course, higher and rent is exorbitant in Southern California, local production means absolute oversight.

Other companies have to deal with shipping errors, incorrect assembly, inferior part-swapping from penny-pinching third party factories and other issues that plague the industry. But EBC ensures that everything is built correctly using the right parts, each and every time. All bikes have unique codes that can be traced back to the individual bike builder, allowing the company to trace an issue to the source if it ever arises.

The custom service teams answer phone calls and online chat requests in the same building where motors and being built into wheels and e-bikes are being assembled from bare frames. If a question comes in that they don’t know the answer to, they simply walk down the hall and ask the experts doing the production.

“We ensure that we always have the best components for every bike we make,” Sean explained as he reached into a box full of hardware, emerging with a palm-full of shiny bolts. “Every piece of hardware is stainless steel so it will never rust. Each bearing is fully sealed so it won’t begin grinding months or years from now.”

At the same time, EBC is honest and straightforward about what it means to be American-made.

The company refers to its e-bikes as American-built with global materials. The complete parts list includes 11 countries that supply everything from the tires to the brakes to the battery cells.

EBC does as much work as it can locally. Some of the components are actually fabricated from raw materials on site. The company’s woodshop churns out beautifully crafted oak and walnut fenders and chain guards.The wheel shops expertly lace motors into rims on site, combining the human hand and robotic truing machines in the work.

And the company’s nearly dozen-strong team of engineers assembles battery packs safely and securely in a number of formats for the various e-bike models that EBC offers. Even small details such as using multiple temperature sensors in the battery assembly make a big difference in the performance.

But EBC doesn’t construct everything in-house. Many components simply don’t make sense to try and produce locally. There are several industries that already contain world experts in their specific components. E-bike motors themselves are built in China, battery cells are produced in Korea, Japan, and China, brakes are made in Taiwan, etc.

What the company doesn’t build itself, it specs itself. “Look at the controllers,” Sean said, excitedly pulling a silver box from a shelf, complete with a Medusa of wires coming out. “We have these built to our exact specs, even down to the millimeter length of each wire. When you see e-bikes with messy wiring, it’s because they just take stock components off the shelf, controllers and throttles and such. We know the exact length that every wire needs to be to sit pretty on our bikes and we have them made that way from the start.”

Sean wasn’t happy with many of the tires available on the market, so he bought all of the best ones and cut them open. He found what he liked best from each one, such as reflective materials, thick puncture protection, strong beads, higher speed ratings for e-bikes, etc. Then he combined all the best features from each tire into his own design.

It’s not produced in the US (EBC has built impressive facilities, but those don’t include a vulcanized rubber plant), but it is manufactured to Sean’s exact design specifications.

So while some of the components are necessarily imported, the local assembly of every single component on the bike ensures the highest standards for quality control.

E-bike companies that produce their e-bikes overseas don’t actually see their e-bikes before they arrive at customers’ homes. The bikes are packaged abroad, shipped to a warehouse in the US, and then forwarded to customers. That means customers are the first to learn of any problems that weren’t caught at the factory.

Electric Bike Company’s in-house production offers the ability to perform meticulous inspection and packaging processes. Bikes are built and then ridden for testing in the exact same location before being packaged by the company. If something doesn’t look or feel right, the test rider can talk to the builder and verify it on the spot before it ever goes into a box.

Speaking of packaging, that’s one more advantage of local production. Many e-bikes that are built in Asia end up damaged in transport because they are shipped in small boxes without adequate protection for an arduous round-the-world journey via a paper carton. Electric Bike Company instead ships its e-bikes fully assembled. The larger box only costs a bit more to ship, and it doesn’t have to worry about trying to cram as many boxes as possible into a shipping container from China.

When customers receive the bike, they don’t have to spend an hour assembling the bike, installing handlebars, mounting pedals, etc. The bike simply rolls right out of the box, ready to ride. I had an EBC bike delivered a few years ago, and it was literally tied inside the box with a bow.

Most e-bike companies in the US account for a certain percentage of e-bikes that will arrive for customers with problems that need addressing by service or replacement.

It’s unfortunately a part of the business model, and it’s simply factored into the cost. But Sean explained that EBC is well below 1 in 1,000 e-bikes that arrives with an issue – an unheard-of figure in the industry.

US-based manufacturing isn’t without its downsides. EBC will likely never be able to compete with the most budget-level offerings in the e-bike industry on cost alone. But that’s why the company’s business model isn’t designed for a race to the bottom.

Instead, EBC has relied on building high-quality yet affordable e-bikes that focus on providing the most customizable experience in the entire industry – something no importer could ever consider achieving.

I see all the time that some people online unfortunately still question the American-built moniker of these bikes, suggesting instead that they are merely “American-assembled.”

At a certain point, it becomes a semantics debate. Is a salad made in a California restaurant that uses an avocado from Mexico not still an American-made salad? Perhaps adding an asterisk with a note that “*salad made in USA from some global vegetables” might calm some pedantic keyboard warriors, but is that really where we are?

The fact of the matter is that on my trip, I saw hard-working and diverse Americans building e-bikes from top to bottom. EBC’s team of over 100 employees touch every single piece of the bikes from the wheels to the batteries to the paint, then test and package them locally.

If that ain’t American, I don’t know what is.